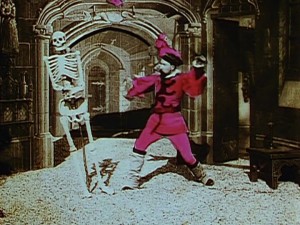 Georges Melies, a professional magician by training, first saw the new “moving pictures” in 1895. Little over a year later, Melies was filming and projecting his own creations. By accident, he discovered that he could use stop-motion photography to render trick visual effects. Melies was also the first to use techniques such as the fade-in, the fade-out, and the dissolve to create the first real narrative films. Melies made over 500 films, but his most famous – A Trip to the Moon (1902) (Voyage to the Moon). Still, Melies, trained in classic eighteenth century theater, conceived all of his films in terms of fully played-out scenes. Unable to keep up with the changing industry, the end of his life was wrought with poverty, yet his films would be monumental stepping stones for great auteurs such as D.W. Griffith. source IMDb

The Devil’s Castle 1896 is considered the first vampire and horror film. Following are a few of his short horror films.